Just a short hop on the Blue Ridge Parkway is the Humpback Rocks Visitor Center, Farm Museum and the trail head to a one mile long hike to the top of Humpback Rocks.  The Parkway was built during the Great Depression as a works project to employ young men from urban areas.  Pay was sent home to help the families and they learned skills such as road building, stone work and construction.  Their work still stands in the bridges, overlooks and building along the Parkway. 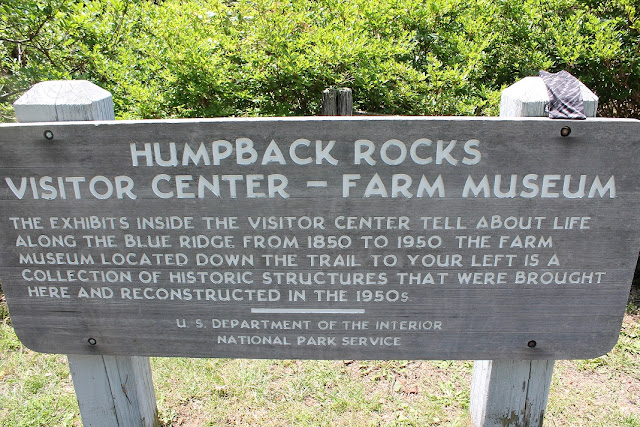 The Visitor Center has music on some weekends during the summer.  It is a chance for tourist to hear the local Blue Grass Music that has strong roots in the Blue Ridge Mountains.  A number of locals come out as well to reminisce about the times gone by when they had grand parents who lived on a small farm like the one represented at the Farm Museum. 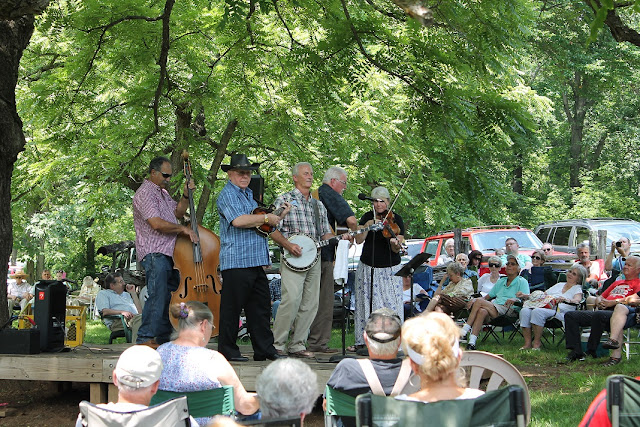 Playing under the shade of an old Walnut tree, local musician play the Banjo, fiddle, mandolin and standup bass.  The local area has a number of people who still make the tradition instruments and sell them all over the world. 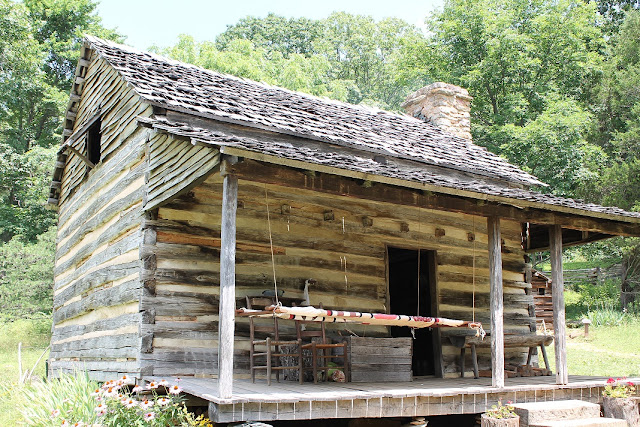 The log cabin home is typical of the log homes built in the area.  Chestnut and oak logs were squared up to make the walls.  Often in later years, the same houses might get white painted clapboard siding.  Farming on the mountain tops was not easy, as there is very little soil and lots of rocks.  The farms would till a small area and have livestock on the rest.   Much of their income came from the woods, either from timber cutting and harvesting chestnuts from the American Chestnut tree.  Wiped out by a blithe in the 1930s, the chestnut tree was dominant tree in the area.  It was a light wood that easy to cut and mill, but had the rot resistance of an oak or cedar tree.  It also produced a flood of chestnuts in the fall that were a key staple to survive the long winters in the mountains.  They were also shipped into places like New York City, where “chestnuts roasting on an open fire” were a traditional holiday treat.  While efforts are still being made to save the species, modern chestnuts are from the Chinese Chestnut and have a different flavor from the traditional American Chestnut. 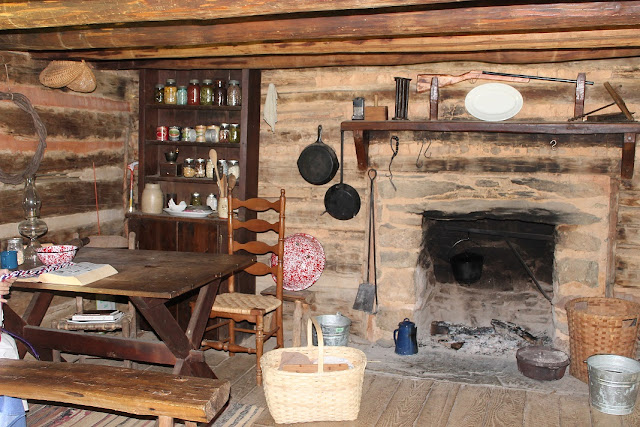 Life in the main room was kitchen, dining room and sleeping area.  The hearth was the focus for cooking as well as heat.  Chores such as getting water from the well, keeping the fire burning and raising your own food were just the normal daily routine for people back then.  A trip into town was a big occasion for people who lived out here.  Even so, at the same time period, one could mail order everything from dresses to houses from a Sears Catalog and Steel structures like the Eiffel Tower were being built. 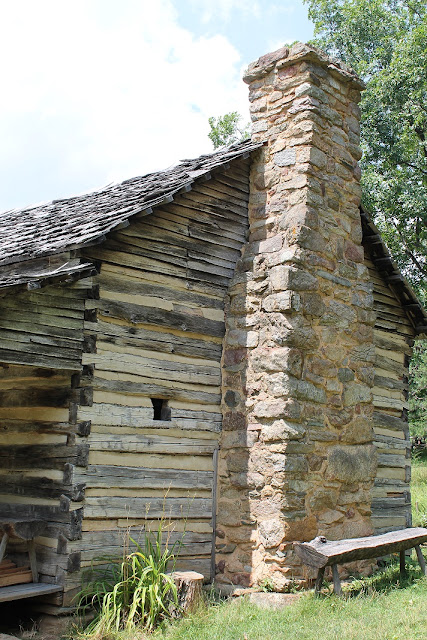 The stone chimney is often the only remnants of the cabin left in the woods to remind us that we are walking on a long forgotten farm.  At the Fenton Inn we have a Chimney and the stone outline on a similar cabin and farm that nature has reclaimed as its own again. 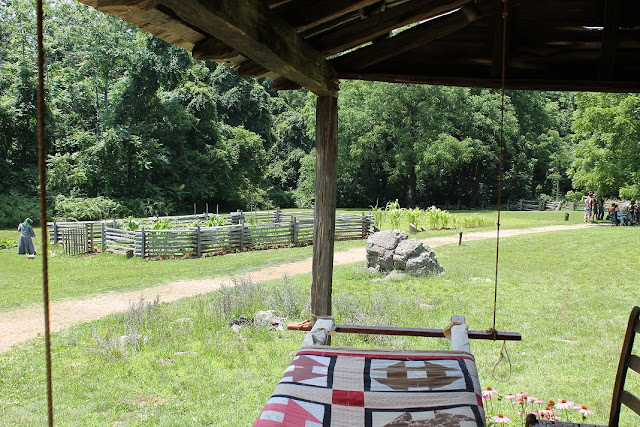 The front porch of the cabin was a room for rainy summer days.  Quilting was a way to make art out of scraps of cloth sewn into patterns. 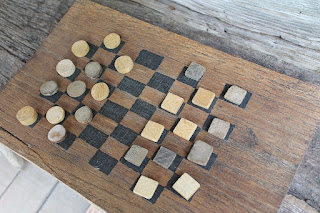 A game of checkers on the porch. 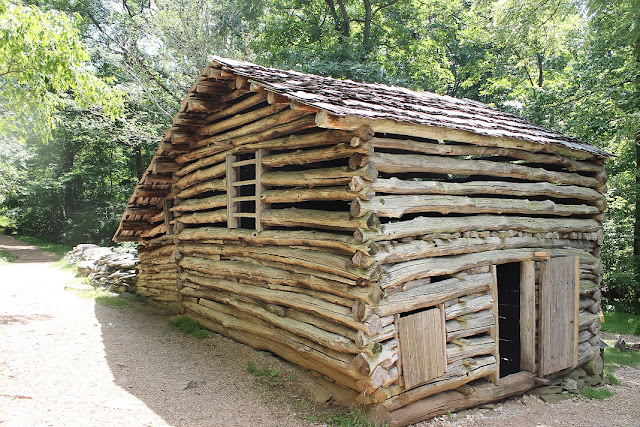 The barn was used to store hay and protect the family cow in winter. 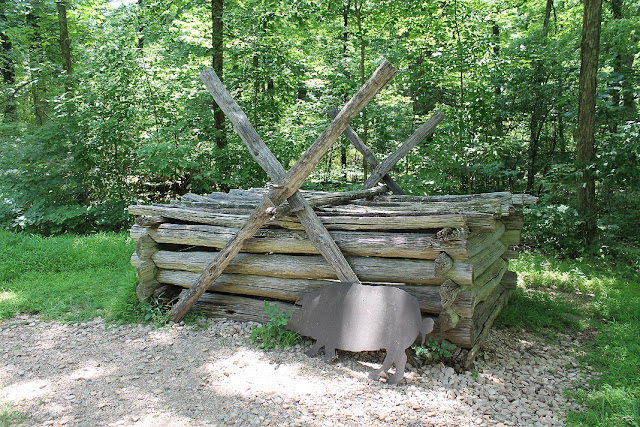 Pigs roamed the woods all summer and were held in small pens to fatten them up on chestnuts in the fall. 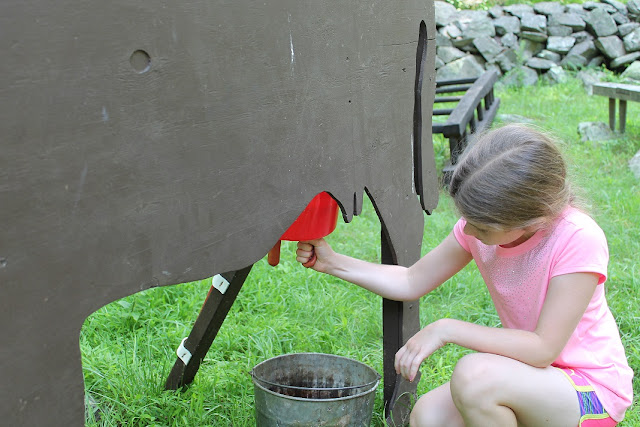 In an age when everything comes from a plastic container, seeing where milk comes from is a shock to many children. 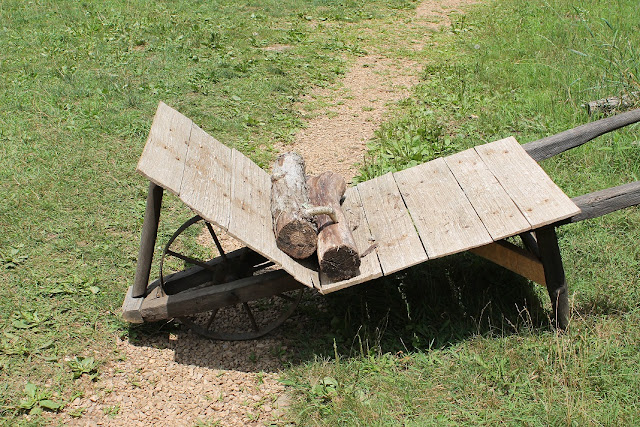 Firewood was a daily task year round for heat and cooking.  The trees were cut to make fields.  The wood was used for lumber and firewood and even the ashes were used to make soap.   It may have been a lot of work, but then how hard do we work today to get things we don’t even need?

Posted by Wilhelm the Woodcutter at 11:06 AM